It’s that time of year again. The Hot Rod Power Tour picked up where it left off, in Bowling Green, Kentucky. In the weeks leading up to the tour I had brake work performed on the rear drums and a buddy came through for me on the stereo installation. Thanks Steve!

The excitement has been building since everyone got home from the last tour. Earlier in the year, I met Scott who planned to long haul in his 1968 Ford Torino. He had a list of upgrades to perform and it came down to the wire. He was traveling with his friend Mike who had been putting in long nights to help get the car ready.

On the morning of the event, we set off for Bowling Green. He had just finished the car 3 hours prior. He was still working out a few bugs with the 302 stroker motor and the Holley Sniper EFI was still learning. Scott joked that we had 12 hours to make a six hour drive.

The drive from Columbus, Ohio to Bowling Green, Kentucky was an adventure to say the least. We had issues ranging from odd to nearly catastrophic. The Torino wasn’t staying cool so we made stops for coolant and fan adjustments.

Outside of Cincinnati, there was an electrical issue we believed to be caused by a bad connection at the voltage regulator, but was later found to be the alternator. The alternator had a wiring issue resulting in burned wiring and alternator failure. Mike went to work cleaning up the wiring while Scott got a new alternator from the parts store. We got it back together, gassed up the cars and set sail. Auto parts store parking lot repair now checked off the Power Tour Adventure List.

At one stop, I noticed that the front left side marker had come loose and pulled away from the Cutlass. At that time the turn signals started interfering with the halo lights and headlight performance.

Back on the road, the cooling issue was still not resolved. Traffic in Covington, KY pushed operating temperatures up for both cars and the Torino didn’t seem to be moving enough air. We cooled down and pressed on.

We later pulled into a gas station to remove the electric fans and shroud. We ran into a group of Power Tour participants from West Virginia. They were making adjustments. One of the guys owns a beautiful blue 1964 Chevrolet Chevelle. He shared some of his cooling and fan experience and offered suggestions.

It seemed the setup was blocking air flow at highway speeds. The AC condenser was also removed since there wasn’t any functional air conditioning and it was positioned in front of the radiator. This was a short term solution that improved temperatures while the car was moving but put the vehicle at risk while idling in traffic.

Both cars were moving along well. Cruising along and enjoying the light weekend traffic in the hills of Kentucky. We were making up time and still on track to arrive during registration hours. Then a loud noise from inside the Torino engine bay brought us to the side of the road. It didn’t sound good.

We all feared the worst. Catastrophic failure hundreds of miles from home on the HRPT is on of the greatest fears of all participants. We checked around and didn’t see any visible damage or fluid leaking. We bumped the car over and discovered the source was on the top of the motor. We pulled both valve covers and found a broken rocker stud on the driver side. It didn’t seem to have impacted any other parts.

We limped back to the exit we passed a half mile ago. There were several gas stations and parts stores nearby so it gave us our best chance at survival. We put our heads together and called all potential resources. Scott called the manufacturer of the valve train kit while Mike and I called area auto parts stores. We discovered that it wasn’t a Ford specific part and the rocker studs are the same for most kits. The parts stores carried the parts but it was a special order item. Meaning the earliest any store could get it would be Tuesday.

Scott sent out an S.O.S. to the HRPT group on Facebook. A guy named Robert replied that he had a couple and would bring them to us from Lexington. He came through with his dad and we got the part installed. They told us about their hot rods and shared stories of engine builds and race cars in the area. His dad is an old school hot rodder and he adjusted the rocker placement by ear. Check breaking down and being helped by complete strangers off the Power Tour Adventure List. 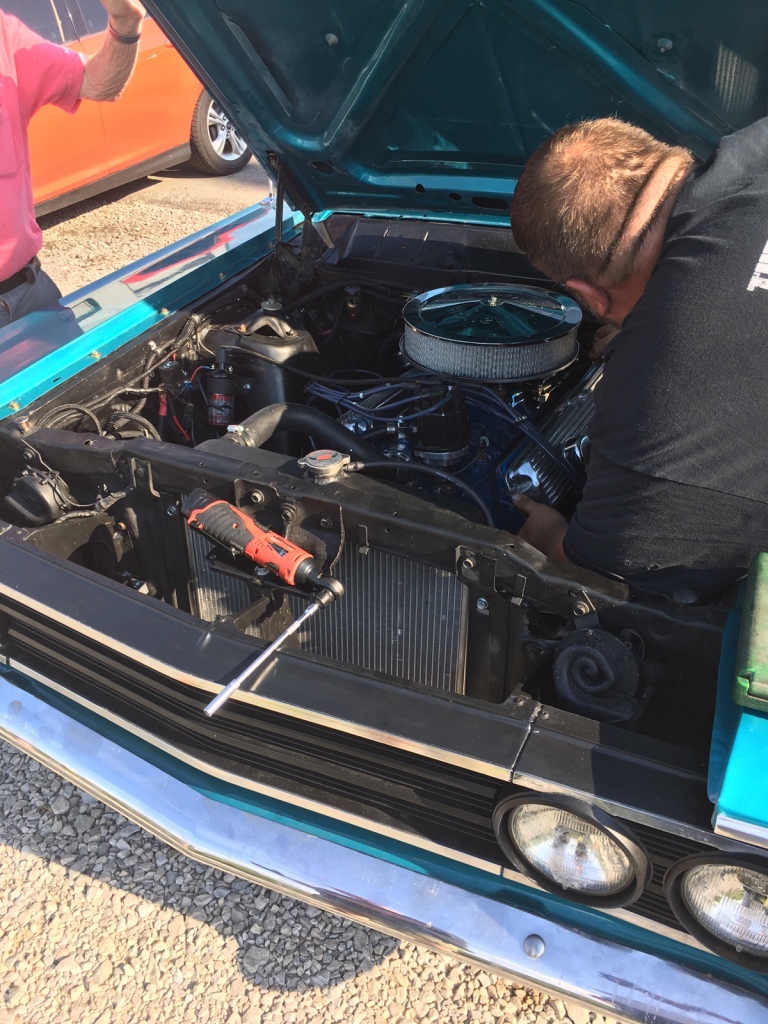 We were about 120 miles from our destination but determined to make it. We started moving again. We ran into heavy rain and some standing water on roads but that didn’t stop us. We made it to Bowling Green. Our six hour drive had taken us twelve hours, but we persevered and shared an adventure of a lifetime. 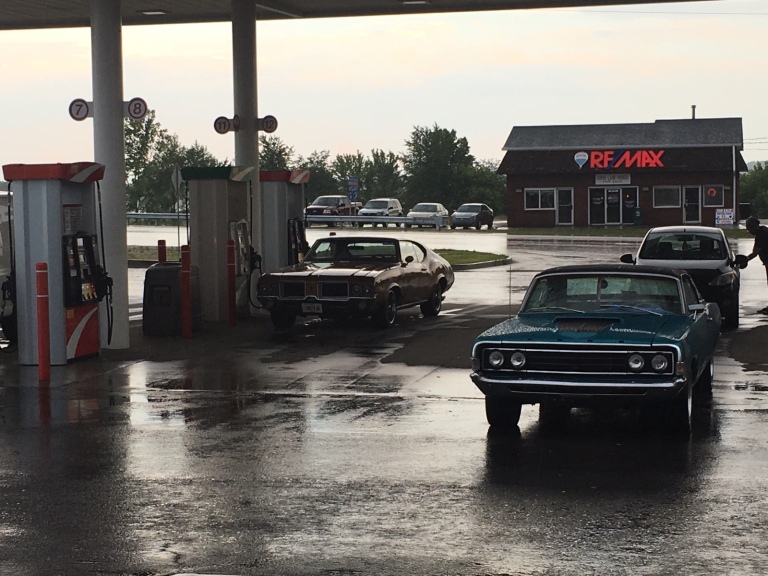 It was a tough day, but Hot Rod Power Tour is the good, the bad, and the ugly. Power Tour is a lot like life. You go further when you surround yourself with a good group of people to encourage each other and help along the way. We all have the same goal of getting our old cars (and us) safely to the next stop.