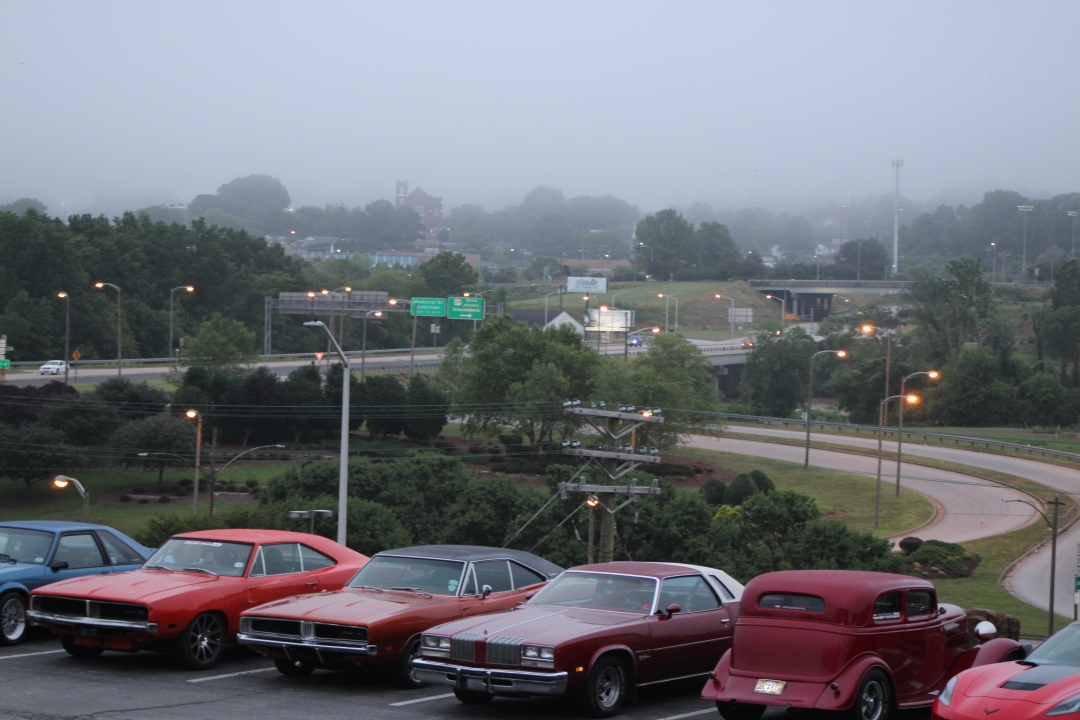 So, I have to confess. Day 3 of the Power Tour is probably my favorite day from the entire week. The route and the venue were perfect. The only thing that could have been better was the weather.

We woke up in Danville, VA to a hotel parking lot full of hot rods, cool temperatures, and lifting fog. The plan everyday was to have breakfast, check out, and hit the road.

When we left off at the end of Day 2, Aaron’s 1959 Chevy Parkwood had been towed to 89 Speed Shop. That morning we got the great news that the axle and bearing had been successfully replaced. Aaron and his dad were back on the road at 9:00am and further down the route.

We were about 30 minutes east of Martinsville Speedway, but it didn’t take long before we met up with other Power Tour participants along the way. We even met up with Scott and Mike at a merge point. We couldn’t have planned it better.

The route took us through the mountains along many curvy roads. It was a great driving experience. The elevation changes and twisties put my BMR suspension and TRSD brakes to the test. I am happy to say they performed well.

The route also took us through Grayson Highlands State Park. Another beautiful road with rolling hills and some curves.

By the time we arrived at Bristol Motor Speedway, it had rained most of the day and the venue was wet. I had signed up to do track laps at this iconic race track known for its high banks and speed, but it didn’t look like the weather would cooperate.

It stopped raining long enough for the first 2 groups to complete their laps, but those of us in groups 3 and 4 would miss out due to weather. Oh well. Disappointed, yes; but we all know you can’t control the weather.

It did give me an opportunity to check out a few rides. I met Jeff Ferguson, from Iowa. He was on the Power Tour with his dad, in his 1953 Chevrolet Pickup. The truck had been shortened and was now on a Corvette chassis. It had the brakes, wheels, and LS1 from the donor car. He shared that he planned to autocross at the next venue. Read more about this project here.

It was a full day. A great drive, a great venue, and we got out just in time to avoid the next wave of storms. It cleared up an hour later and we met up with friends for dinner. Rest up and do it all over again tomorrow.

Happy National Mustang Day!
Nissan GTR in Blaze Metallic AKA Katsura Orange. The nicest factory orange out there! 🧡
Look closer 👀 The #bergundybaron at a car show in St. Charles, MO. The whole body is on backwards 🤯, but the front, I mean the back has wipers and a pin on trunk or hood with hood vents or trunk vents. 🤷🏾‍♂️
Loading Comments...
Comment
×
<span>%d</span> bloggers like this: