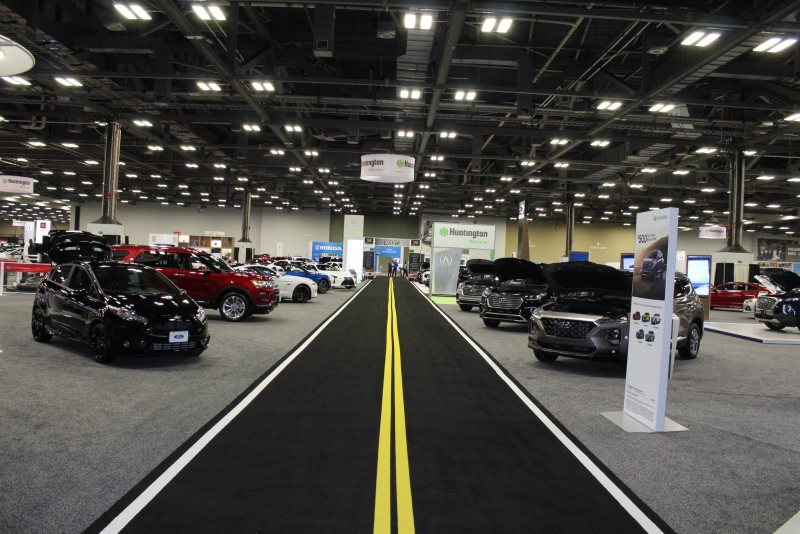 The 2019 Columbus International Auto Show kicks off Thursday, March 14th and runs through Sunday, March 17th. The show is presented by the Columbus Automobile Dealers Association and Huntington Bank. There is representation from nearly all manufacturers and several special automotive features.

One of the crowd favorites is Dreamers Alley, which features exotics from Columbus Cars and Coffee. The display features rare Lamborghini, Ferrari, and Mercedes Benz models.

A special exhibit from Motts Military Museum is setup with military vehicles that served during World War II, Korea, Vietnam, and Desert Storm. The team is even dressed in military uniforms with sandbags and other equipment at their tent.

Rabid Customs is a local performance and customization shop in central Ohio. They brought out several vehicles including a retro styled Ford F250 with paint and details period correct for 1985. You may remember their signature white Ford GT that Chip Foose helped design from their open house event I covered in 2018. The Ford GT show continued with Gulf Livery 2004 and 2019 models on display.

Another performance shop in central Ohio that’s doing big things is Carlyle Racing. They display likely combined for close to 10,000 horsepower. They brought a ZL1 Camaro, a Hellcat, several street Corvettes, but the feature ride is their 3,000hp, twin turbo, drag strip monster, 6.5 second 1/4 mile Corvette. It is one of the fastest Corvettes in the country.

Stay tuned for coverage of the new cars and and classic cars at the show. Never miss a post again! Join my email list today.

Processing…
Success! You're on the list.
Whoops! There was an error and we couldn't process your subscription. Please reload the page and try again.