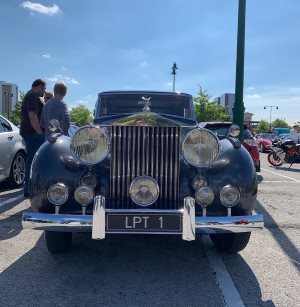 Another beautiful spring day in Central Ohio and no morning commitments means a trip to Cars & Coffee. I knew that a sunny day in the low sixties would bring out a wide range of enthusiast and today’s gathering did not disappoint.

At every meet, there is always one car that steals the show. It may be an exotic, a rare classic, an original numbers matching something or the latest off the assembly line. This week, that car was a 1949 Rolls Royce Silver Wraith. This car was dripping luxury, with classic details that are paid tribute to in today’s models. It was hard to believe that this car is 70 years old! The round headlights, kissing doors, and signature hood ornament are clues in case you don’t see the double R.

It was a proud moment for me as this was the first Cars & Coffee I attended with five Oldsmobiles present. I could not believe the representation and was happy to be a part of it.

I spoke with the owner of this 1977 Oldsmobile 442 that bought it brand new. It was all original except the tires and a repaint in the 1980’s due to sun fade.

There were a lot of nice Fords this week, including a 1964 Fairlane 500 and a trio of first generation Mustangs.

There were 2 Dodge Vipers and both caught my eye. I spoke to the owner of the white 2013 Viper. He previously owned a Hell Cat, but the Viper has always been his dream car. I congratulated him on reaching his dream car. I love it when an enthusiast reaches that point in their journey.

It always a nice meet when there is a Lamborghini parked next to a Ferrari one row over from a Ferrari.

Shout out to the team at Lucore Racing. They brought out Boosted Lexi and it looked/sounded great.

I grew up an Army brat and my dad was stationed in Germany from 1988-92. This BMW, Mercedes-Benz, and Volkswagen reminded me of cars we would see around town and on the Autobahn.

Processing…
Success! You're on the list.
Whoops! There was an error and we couldn't process your subscription. Please reload the page and try again.